Historically, Asia’s architecture has tended to be heterogeneous; each civilization – from the Persians to the Chinese, the Indians to the Ottomans – has contributed to the creation of an architectural cartography that established the spatial organization of cities such as Istanbul, Isfahan, Samarkand, Calcutta, Beijing, and Tokyo, and immensely influenced the architectural traditions of the European, African continents. Consequently, Eastern contributions to Western culture and architecture deserve significant scholarly investigation. Nineteenth and twentieth century modernism (as evidenced by the modern movement in architecture in the West) dominated the landscapes and cityscapes in Asia, with largely unpleasant results. With the vast urbanization that has taken place in the later part of the twentieth century, the number of megalopolises that have emerged marks a dominant trend around the world. By the end of the twenty-first century, Asia will have the largest number of megalopolises. Recently, architectural traditions and cultures on the continent of Asia have started to stray from modernism. Architects in Asia are now offering alternatives relevant to their specific geographies and cultures.
As part of its expanding activities 2A is now organizing the 2A Asia Architecture Award (2AAA). This event takes place annually to highlight and celebrate regional and Asian achievements in architecture which will feature awards and exhibitions as well as debates by the participants on the influences and methods. 2A Continental Architectural Award is a critical effort to recognize and acknowledge architects who have engaged in creating and designing buildings and cities in Asia originating from their specific cultural and geographical localities and possess specific quality and characteristics attributable to their local origins. This continent-wide annual award is an attempt to offer long overdue recognition to a whole new class of architects. A specific theme will be determined and announced every year, and the award’s content will be adjusted accordingly.
2ACAA brings up and discusses the following aspects of the contemporary practice of architecture in the world:
• Theoretical visions of culture, customs, politics, economics, history, and other social elements
• Ideas regarding various origins
• Conceptualizations
• Artistic and aesthetic criteria
• Sustainability
• Modern life and technology

2A Magazine is pleased to announce 2ACAA 2017, with the theme of “Innovative Architecture in Various Continents” for Asia and Europe. Accordingly, the Award is for recognition of an individual’s or group’s substantial contribution to today’s architecture in Asia in terms of contemporary challenges of the field and region and lasting influence on the theory and practice of architecture.
2ACAA 2017 will be accompanied by an event taking place in Berlin in October 2017. This gathering is a profile of the diversity of cultures, identities, themes, ideas, and experiences in Asia’s architecture and a platform to share, explore and discuss in a professional environment. The program includes:
• The Award Ceremony in October 20th, 2017 at “Design Academy Berlin”.
• The exhibition of the winners projects in October 20th, 2017 at “Design Academy Berlin”.
• A Unique events that brings Asian and European Architects together.
More Details about 2017 Award Ceremony and Exhibition can be find here.

The following criteria will be considered to recognize and honor a built project/ future project in Asia that has produced significant contributions to humanity and built environment.
• Design Achievement including Concept, Strategy and Proceedings.
• Technical advancement includes engineering achievements (structural, mechanical, etc.) and innovative use of materials.
• Reflection of sense of place and of cultural identity and ecology; environmental sustainability (including ecological, and sociocultural sustainability)
• Social responsibility and community and urban connectivity.
• The effects of economical condition on the project.

From a survey review of the projects selected by the 2A Asian and European  Architectural Awards, what are the key, common-ground lessons learned about principles and conditions that support transcendence in architecture and practices that perpetuate access to such realm? How can they serve as “beacons” or “attractors” (from Chaos Theory) that may (1) guide future design efforts toward Transcendent Architecture; (2) empirically indicate its presence; and/or (3) provoke an experiential awareness of the sublime and the ineffable in the perceiving individual?

At the core of our search might be the questions: what is transcendent creativity and how may some of the following considerations suggest valuable domains for investigation and inspiration to evoke a viable, common-ground and multi-dimensional framework for achieving in the individual and the collective a profound awareness of potentially holistically sustainable, culturally conscious and integrated 21st-century worldviews about the “Transcendent” in Architecture and environment building?

These questions are especially urgent now, at this threshold of the 21st century threatened by vast impending global crises when critical thinking, at its most profound best, must contend with and challenge the pervading, outdated materialistic notions of reality that have brought us to this tipping point. The current model of ultimate reality holds that all questions can be answered by means of the scientific method of objective observation and measurement and existence is but a temporary, lifeless group of particles and waves that accidentally created separated human consciousness from isolated material realities. This notion is now being doubted by new state of the art paradigms and reinforced by discoveries of ancient wisdom traditions, which contend that our external and internal perceptions are fully intertwined and say that reality is based upon our consciousness which conceives, governs and generates our perceptions of the physical world.

For completed projects, the award will be presented in the following categories. All categories are open to practices of all sizes and there is no limit to the amount of categories. You can enter, however one project cannot be entered in two different categories. Please see How to Enter for more details on entries.
1) Residential

B- Villa
2) Commercial (Office & Business,  Retail and wholesale, Production)
3) Public (Sport & Leisure, Education, Hospitality, Culture, Mixed Use, Health, Religion, Civic ,Transportation)
4) Urban Projects, Rural Projects, Landscape & Public Spaces (Including squares and streets)
5) Old and New (Reuse and adaptation, Renovation, Restoration, Regeneration)
6) Interior Architecture
If you need help to select the right category for your Entry please contact us and we will be happy to advise you.

This sub-category is a celebration of excellence design-only, future or uncompleted projects including entries of regional/ international competitions, that meet the following conditions. We will be looking to champion creation and concept that has pushed its specific typology forward and proven a holistic and effective approach. Also:
• The site of the project is located in Asia, having rich ecological, cultural, historical or physical characteristics and features.
• Has Focused on responsive design, having addressed, challenged or responded to an architectural-related issue (physical, ecological, sociocultural, contextual, technical and..).
• It is based on local or regional studies.
• Introduces or represents an innovative design vision / approach.

Please note that:
• Future project category covers all eligible entries, regardless of the project program and subject.
• Except for the date of completion, this category covers and follows the same regulations and procedure for submission as built project categories.
• Student designs including student competition entries are not eligible for participation, however university research-based projects are highly welcome to enter.

Rules and Conditions for Entry (2A Asia Architecture Award 2017):

As President of Ardalan Associates, LLC, Nader Ardalan is an Architect with a long and distinguished international career in the fields of Planning, Architecture and Historic Preservation and is a recognized world leader and expert in the field of environmentally sustainable and culturally relevant design. He holds a Bachelor of Architecture from Carnegie-Mellon University and a Masters in Architecture from the Graduate School of Design, Harvard University. He has served as Principal-in-charge of International Design and Operations at Jung/Brannen Associates of Boston from 1983 to 1994. During this period he has won a number of International Design Competitions, including the Citizen’s Bank Headquarters in Providence, Rhode Island and the Abu Dhabi Oil Company Headquarters in the UAE. From 1994 to 2006, he served as Senior Vice President and Director of Design at KEO International Consultants, a leading multi-disciplinary firm of over 2,000 staff located in a number of countries in the Gulf Region. From 2006 he served as Research Fellow of the Center for Middle Eastern Studies, Harvard University, where the Kennedy School of Government sponsored his currently on-going research for the Kuwait National Green Campus Initiative. In February, 2011, he joined the Harvard University Graduate School of Design as Senior Research Associate and Senior Editor of the Gulf Sustainable Urbanism project, sponsored by the Qatar Foundation. He is currently the Senior Advisor for the Harvard GSD Project on Sea Level Rise for Southwest Florida. He is the co-author of The Sense of Unity, published by Chicago University Press; The Habitat Bill of Rights; Blessed Jerusalem; Exhibitor in MANtransFORMS, Smithsonian Institute, Cooper Hewitt Museum, New York, NY; He has been a Visiting Professor at Harvard, MIT, Yale and lecturers widely internationally.

Ar. Shirish Beri’s works, which tend to reflect his values and concerns in life have been bearing their distinct mark on modern Indian architecture since 1975. They strive to address his life concerns of man moving further away from nature, from his fellow human beings and from his own self. Through his work, Shirish Beri probes the multisensory and the immeasurable dimension of space while trying to evoke a reflective pause amidst today’s clutter and background noise. He feels that issues of sustainability can be aptly addressed only through the right attitudes and goals. His designs try to achieve an inherent sense  of  unity and  harmony with various   natural  and man-made  elements and forces. He has designed a number of campuses for national & regional level institutions for research, rehabilitation, health care and education, along with various other types of buildings. Shirish Beri has won a number of national – international recognitions.

His works have featured in various national & international publications on Modern Architecture, magazines and newspapers- His works have been included in various important exhibitions such as – “50 Years of Indian  Architecture & Planning”, Indian architect & builder’s exhibition “Design directions” and “State of Architecture” at NGMA, Mumbai- Two very special extensive exhibitions of his work and poems called –  ” A search for wholeness  ”  and “Urmi – the inspiration” have toured various cities in India and abroad- His work has been filmed for a special Television serial  – Nature  + by RA Vision, Delhi- His recently published book “Spaces inspired by nature” is being received very well in India & abroad.

Note: Assessing projects will be carried out according to judgment criteria in a two stage, score-based process.

Start your entry from here 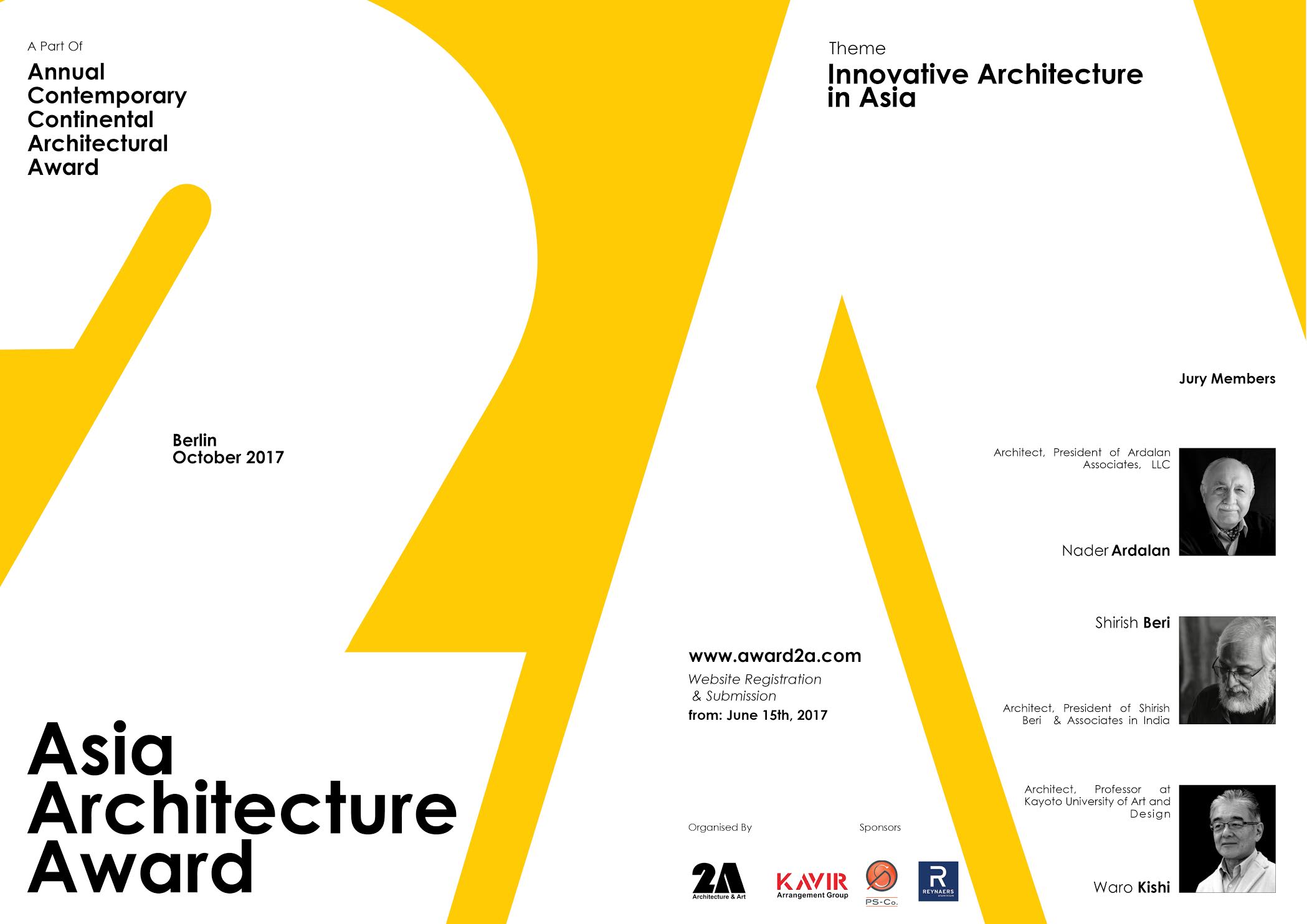